The world is full of women with no voice of their own or no one to speak on their behalf. It is good that Goblin Baby Theatre in its own way highlights their plight in an entertaining, but provoking fashion. ★★★★ - Female Arts 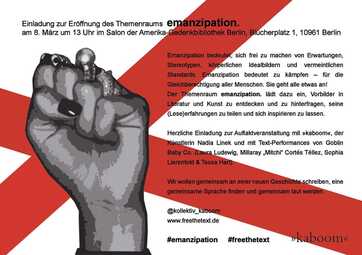 We then staged our first German-language theatre show in February 2019, a V-Day benefit production of Die Vagina-Monologe at Theater Verlängertes Wohnzimmer in Berlin, with this also being our 7th (and so far final) yearly production of The Vagina Monologues.

​In March 2020 we returned with another V-Day production in Berlin, this time a German and English language Raise the Vibration performance in collaboration with the collective kaboom at the Amerika-Gedenkbibliothek. This event was part of a special opening celebration of the famous library's theme room on "emancipation" but ended up being the last event staged there before the eventual Covid-19 lockdown.